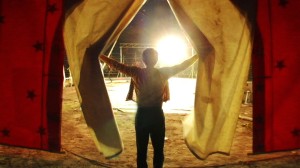 From first-time director Aaron Schock comes Circo: a fascinating documentary which follows a family circus around the dusty heartland of Mexico, from one small town to the next. Though the idea of a documentary focusing on the lion tamers, clowns and other entertainers of a circus is unique, the true focus here is the sprawling family unit running the operation – led by Tino Ponce, the ringmaster and manager. As a father, son, and husband, it’s Tino’s calling to not only live up to the history of the circus (a family business 100 years in the making) but to pass the reins to his son and daughters. His methods of parenting are unusual – seeing him shape his children, both mentally and physically, into the future caretakers and stars of the circus is often uncomfortable but also provides great dramatic moments. We are granted a view of how every aspect of the circus operates: seeing everyone performing a dozen functions nightly is interesting and often hilarious.

The central dramatic arc is provided by the circus’ gradually decreasing returns – the family play to smaller crowds night by night, and the pressure upon every family member is palpable – including the children, who often seem unwilling to take up their father’s mantle. At times, the film seems like a strange tribute to The Godfather, from the reluctant son to Tino’s neglected wife Ivonne. The final scene arguably invites the most explicit comparisons to Coppola’s film, with a truly unexpected and bittersweet twist.

The footage captured by Schock and his crew is intimate, but occasionally rough, and the film’s hook might prove to be a difficult sell: can you remember the last great circus film you saw? However, Circo is well produced, commercial in its sensibility, and soundtracked by the terrific Calexico – providing a charming and unique accompaniment to the action. There’s moments of real joy and sadness to be seen in Circo, despite a shaky beginning, and deserves to be seen by any discerning documentary fan. Aaron Schock is certainly a talent to watch.

This site uses Akismet to reduce spam. Learn how your comment data is processed.